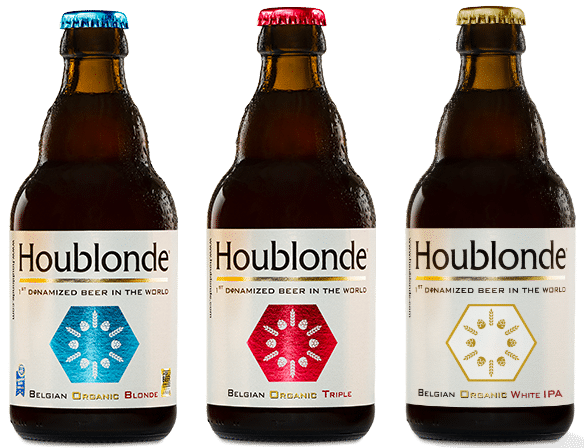 HOUBLONDE Organic Blonde, Triple and White IPA are craft beers that offer all the subtleties of the floral universe, with the taste and biodynamic dimensions on top.

Floral elixirs are subtle liquid extracts prepared by solar infusion of wild flowers. Each elixir carries an energy signature specifically linked to the floral species from which it is derived. Want to know more?

It contains a subtle blend of a wild flower elixir from the Pyrenees, the Astrantia Major, and organic vanilla.

The Astrantia Major: A mountainside is flooded with sunshine, near cultivated fields and meadows. The soil is heavy and wet. Only one plant occupies the land, the Astrantia major. Undoubtedly, it draws excess water from the ground to evaporate it through its delicate structures in the luminous air. The Astrantia elixir carries within itself this true metamorphosis from a plant of primitive complexion, linked to the forces of Water, into a most evolved and delicate plant, devoted to the forces of the Air.

The Houblonde Organic Triple is composed of 3 elixirs of wild flowers from the mountains:

Agrimony: the flowers are yellow, assembled in a central ear that rises towards the light. It blooms at the beginning of summer. The elixir was made in June, in Taillet in a clearing in the Aspres forest, in Vallespir (Eastern Pyrenees).

Water Violet: It is a plant that lives entirely in water, it is submerged for a good part of the year. From May to June, straight and elegant stems begin to emerge from the water and throw their pale purple flowers into the sunlight. It is rare, delicate, and does not tolerate any form of pollution. It was picked in France, in the Vosges.

Wild Rose: A thorny shrub with beautiful, delicate and blooming flowers that range from white to pink. The elixir was made at the end of June in Camurac in the Aude, on a plateau covered with rosehips, close to the then green ski slopes of the Pyrenean mountains. The elixir helps to overcome the devaluing messages printed in the depths of our psyche to allow us to access the joy of life.

Did you know? Floral alchemies have a triple effect on beer. They give the beer its bouquet of aromas, its harmony and its silky, smoothy taste – not to mention its energy signature!

What the epicureans say:

« It’s no exaggeration to say that this beer has a soul. It’s the floral notes that make it stand out from the rest. » – Joanna, 31.

Get into her secret